Join the conversation with the award-winning Broadway and television actress.

Join the conversation with the award-winning Broadway and television actress.

IU Auditorium presents a Livestream Q&A with Peter Pan’s Cathy Rigby. This conversation with the award-winning Broadway and television actress will be available to view on Zoom and the IU Auditorium Facebook page.

Rigby is best known as a medal-winning American gymnast and Tony-nominated actress for her theatrical production in Peter Pan. In fact, she starred as Peter Pan in the touring Broadway production that performed on the IU Auditorium stage in 2013.

Along with the role of Peter Pan, where she also appeared twice on Broadway, she starred in Seussical the Musical on the Great White Way. Other national and regional tour credits Annie Get Your Gun, Meet Me in St. Louis, South Pacific, Paint Your Wagon, The Unsinkable Molly Brown, Silvia, and Steel Magnolias.

Cathy Rigby McCoy founded the McCoy Rigby Conservatory of the Arts in 2006 with her husband, Tom McCoy. In addition to being an actress, she is an executive producer at La Mirada Theater, a teacher, entrepreneur, philanthropist, mother, grandmother, and knows what it takes to achieve success!

This special event is being presented with support from Riley Physicians and Fred & Beth Cate, along with our season partners Curry Auto Center and Cook. 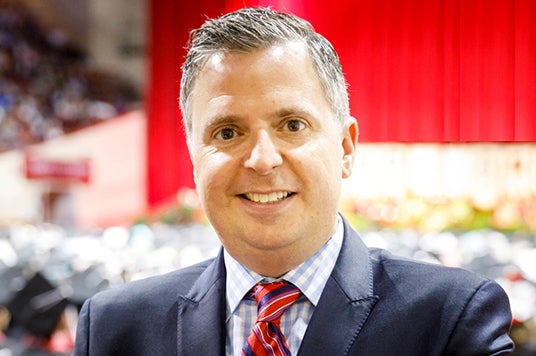 Building the IU Auditorium Season: A Masterclass with Doug Booher