BLOOMINGTON, Ind. – The international sensation STOMP brings its explosive, inventive, and invigorating stage show back to IU Auditorium on Thursday, November 14 at 7:30 p.m. This energizing family-friendly production is an exciting experience for all ages, and will include IU Auditorium’s annual Kids Night on Broadway lobby activities preceding the show. IU Auditorium is also helping to “stomp” out hunger with a canned food drive with Hoosier Hills Bank.

Full of matchboxes, brooms, garbage cans, Zippo lighters, and much more, STOMP creates an electrifying show blending dance, music, and theatrical performance. This unique musical experience of choreographed percussion, movement, and physical comedy has been inspiring audiences for almost three decades. The evolution of the performance proves that with a little bit of rhythm, creativity, and music, a sensation can be born.

Audiences and critics alike have loved STOMP since its creation in 1991. STOMP has been accredited with numerous awards and titles including the Olivier Award for Best Choreography in 1994 and an appearance on Entertainment Weekly’s list of “New Classics: The 50 Best Plays and Musical from 1983 to 2008.” STOMP also made its way from the stage to the TV screen producing and premiering an HBO miniseries, Stomp Out Loud, which received four Emmy nominations.

In addition to the performance, STOMP will be the IU Auditorium 2019–2020 season’s annual Kids’ Night on Broadway. IU Auditorium is pairing up with Bloomington’s WonderLab to bring crafts and creative educational activities for children and families to enjoy preceding the show in the IU Auditorium’s lobby when doors open at 6:30 p.m.

Each year, IU Auditorium’s Circle of Friends provides tickets to underserved youth in our community to access world-class performances and special activities with the Give the Magic program. This year’s Give the Magic participants will experience STOMP free of charge and have the opportunity to enjoy Kids Night on Broadway activities 30 minutes prior to doors opening to the public. IU Auditorium would like to thank longtime partners at IU Health Riley Physicians Pediatrics and its Circle of Friends members for making this opportunity possible for families in the community. For more information, including how to provide support, visit IUauditorium.com/GiveTheMagic.

Starting November 5, IU Auditorium, Hoosier Hills Food Bank, and STOMP are partnering to “stomp” out hunger with a canned food drive. Donation bins will be placed inside the entry of IU Auditorium for non-perishable food items November 5 through end of the show on November 14. Those attending the STOMP performance may also bring items to donate to the show. 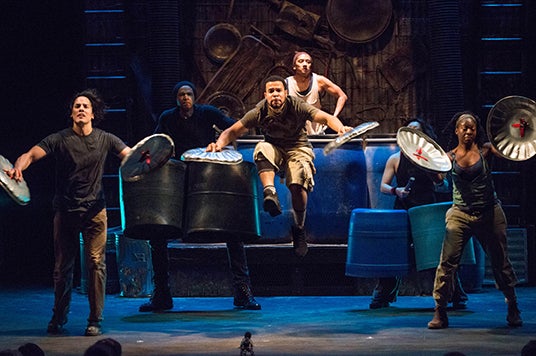